February 24, 2021: Africa’s richest square mile continues to live up to its name as the Mirage III fighter jet joins the list of must-see sites in Sandton. The Mirage III fighter jet has found a new home on top of Moti Group’s FuturExotics Lifestyle Emporium in Parkmore. The emporium, which is currently under construction, is set to display a variety of luxury items such as cars, watches, art and other exclusive collectables. 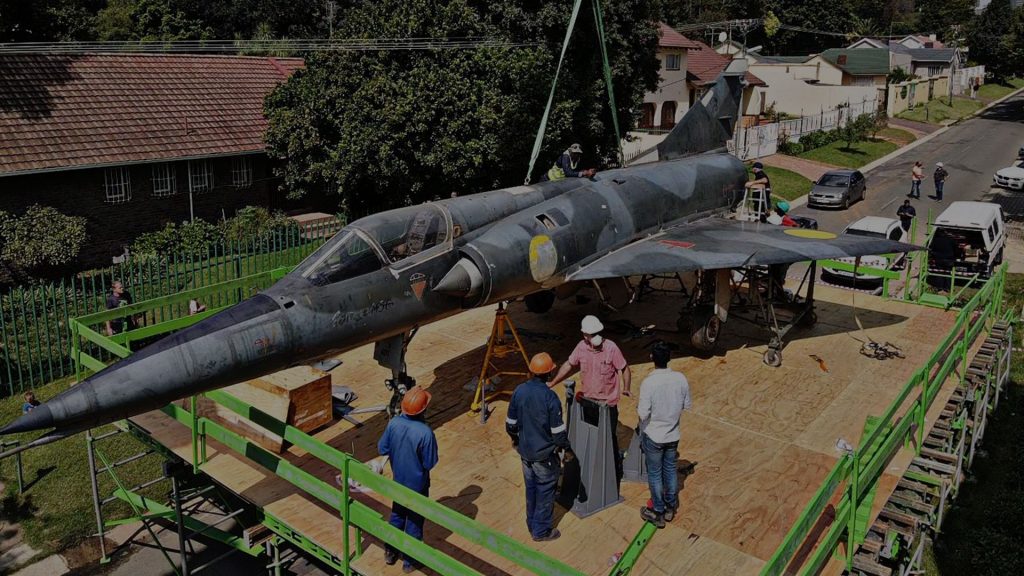 A Mirage Jet is seen installed on the roof of Zunaid Moti’s still under construction FuturExotics Lifestyle Emporium in Sandton, 15 February 2021. The jet is clearly visible from Sandton Drive. Brainchild of businessman Moti, the property will form part of the Moti Group’s official offices and will display an array of luxury vehicles, time pieces and art among other collectibles. Construction is expected to be completed at the end of July. Picture: Michel Bega
The Mirage III aircraft on top of the lifestyle emporium is a decommissioned and non-functional aircraft. Group chairman and business maverick Zunaid Moti described the jet as a representation of Africa’s financial capital.
The Mirage is part of a long line of combat family aircraft that were produced by French aviation manufacturer Dassault-Breguet. One variant of the Mirage III became a basic interceptor, a second became a fighter-bomber and the third a reconnaissance aircraft.

According to the Britannica Encyclopaedia, the Mirage family of aircraft was adopted by many of the world’s smaller air forces during the 1960s because it was relatively inexpensive, simple and durable. These countries included Brazil, Lebanon, South Africa, Argentina, Pakistan, Spain, Australia and Switzerland.
“I’m excited to have the Mirage as the signature piece on top of the FuturExotics Lifestyle Emporium building. It is symbolic of beauty, strength, agility and speed, which is what Sandton represents as the financial capital of Africa.”

“Moti Group has always had a keen interest in art and having the Mirage in the skyline of Sandton, on top of our building, is not just a beautiful piece of avant-garde art, but represents our fast, forward-looking and innovative approach to business,” Moti said.

The aircraft can be seen when driving along Sandton Drive between Grayston Drive and Marie Avenue.